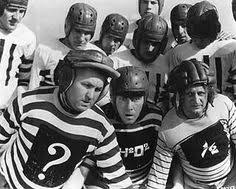 There is a crapshoot element to picking games against a point spread. And no, this is not simply an excuse for the mediocre success rate I’ve put on the board this year as part of the NFL Six Picks segment.

I look at the spreads weekly, and never cease to be amazed at the high percentage of games that I have absolutely no clue as to who will win, let alone cover (which explains, for those of you who wonder about such things, why I only pick six games every week).

For example, Baltimore is at Carolina tomorrow. The Ravens, on the road, have been installed as 2 1/2 point favorites, even though their 4-3 record is a half game worse than the host Panthers. Both teams have looked good, even really good, at times this season. And both teams have also looked flat out awful on occasion. Such is the NFL in 2018, but it still doesn’t explain how the Vegas oddsmakers have arrived at Baltimore as favorites, giving 2 1/2 to a solid Carolina team on their home turf. I would have zero confidence taking either side of this bet.

The other aspect I find so interesting about these points spreads, is how accurate they turn out to have been when we review the final scores on a Monday morning. This uncanny accuracy is particularly difficult to fathom when it comes to handicapping two awful teams playing out the string in late-October, facing each other with nothing on the line other than pride and the fact that someone has to win.

This is where we’ll begin Six Picks this week. There are a few games on the docket that are interesting only because of how putrid the matchups are. Take, for example, the Niners as favorites (not a misprint) over Arizona (giving 1 1/2 on the road, no less). Please tell me who is betting on this game? Degenerate gamblers with serious problems? Okay, that’s fair. Even those with serious gambling afflictions are entitled to recreational activity and fun just like the rest of us, but man oh man. Putting hard earned cash on the line and picking sides in this one just doesn’t make sense. Does it?

Or how about the reality that the Giants and the Raiders are both given a field goal’s chance of actually winning a game this week? Anyone who has had the misfortune of watching either of these two teams in action over the last several weeks would never, ever pick them to cover a spread, let alone outright win another game. And to punctuate how bad a bet the Giants and Raiders should be this week, both teams made full-on-tank-the-season roster moves this week, clearly signaling to the rest of the league their complete surrender.

Yet Vegas tells us the Giants and Raiders have a chance, which means either someone knows something, or the teams they play this week suck. Or maybe both.

So given those ringing endorsements, we’ll begin this week’s NFL Six Picks with three head scratchers that only Vegas, obsessive gamblers, and AtticBro care about (home team in ALL CAPS):

GIANTS (+1) over the Washington Football Club — It’s probably not fair to Pat Shurmur to include him in a post that begins with a photo of the Three Stooges donning football gear (now if Ben McAdoo were still at the Giants’ helm, it would be entirely justifiable). But as Bill Parcells used to say, “you are what your record says you are.” And that means the Giants are a very Stooges-like 1-6, buried in a mediocre NFC East before the candy’s been handed out on Halloween night. And if the Larry/Moe/Curly reference is unfair to Shurmur, it’s even meaner to throw Jay Gruden into this equation, since he’s actually running the show for a first place team (so what if no one in the league thinks his team is any good). It’s tough love for Jay Gruden, though, since unfortunately you can’t pick your siblings. Jay happens to be brothers with the most deserving of the present day head coach “stooges” — good ole “Chucky” Gruden (more on him in a second — for those of you struggling to connect the dots here, I will remind you that Moe and Shemp of the original Three Stooges, were indeed brothers in real life). Anyway, like I noted a couple of paragraphs ago, if you’ve watched much Giants football this year, you’d never pick them for anything, especially after they made two trades this week that severely weakened the already soft New York defense. Which is precisely why we are picking the Gints to win outright over that pigskin team from our nation’s capital. The point spread never lies. Besides, any team that really thinks they can ride Alex Smith and Adrian Peterson to the playoffs is delusional. Hope you enjoyed that time in first place, D.C. fans, it is about to come to an end. (Giants in a pillow fight, 21-20)

RAIDERS (+3) over the Indianapolis Colts — Why? Good question. Dissension in the Oakland locker room? Check. Traded their best skill player this week? Yup. Finger pointing at QB Derek Carr? Affirmative. Players wondering off the record about the motivation of their coach (hello, Shemp — I mean, Jon) with the 10-year contract? Yes, there’s that, too. Facing an Indy team that comes in off their best offensive showing of the year last week? Yessiree. So, why go with the Raiders?  Because a home dog getting a field goal against another lousy team when everyone is counting them out smacks of a sucker bet, tossed out there like a bucket of chum, by the Vegas oddsmakers. Am I outsmarting myself with this pick? Wouldn’t be the first time (and probably not the last). (Raiders, 28-27)

ARIZONA CARDINALS (+1.5) over the 49ers — Another “Who Cares Bowl” courtesy of the NFC West. Again, how can the Niners be favored in anything after failing to show up at home against their arch rival last week? Well, for starters the Cardinals do appear to be that bad. And like their brethren in Oakland and New York did this week, the entire league anticipates Arizona trading their best player, cornerback Patrick Peterson, any minute now. The Cardinals seem to get blown out every week, and are fully deserving of being a “home dog.” Well you know what they say, “in for a penny, in for a pound.” This spread is practically begging bettors to take a flyer on Arizona. Okayyy… (Cardinals, 19-13)

Green Bay (+9.5) over the RAMS — Someone famous once said doing the same thing over and over again and expecting different results is the definition of insanity. Uh huh… Well, the likelihood of a Rams clunker increases with every win, doesn’t it? That is unless you are among those pundits who believe the Los Angelenos may run the table at 16-0 this year (I actually read two articles this week making the case for how that will happen). And the Packers, while certainly not to be confused with the Lombardi vintage, aren’t the 2018 49ers either. Aaron Rogers will put up some points Sunday and force Jared Goff to win one with his arm instead of on the back of the superhuman Todd Gurley. (Rams, 31-27)

VIKINGS (+1.5) over the Saints — A game to look forward to on Sunday night! Two of the better teams in the NFC (we think, recognizing that after the Rams, the NFC quality bar is exceptionally low) square off with a couple of big-armed QB’s leading the way. Yes, we all love Drew Brees, and he remains the real deal even as he approaches his 75th birthday, while Trent Green is still very much in TBD-mode with the Vikes treading water at 4-3. However, I can’t see New Orleans running away with the NFC South, and this Vikings defense is no joke (provided, of course, they aren’t lined up across from the Buffalo Bills). Chalk up another one for the home dog. (Minnesota, 35-33)

Patriots (-13.5) over the BILLS — Egads, how did this one end up in Prime Time? I won’t turn this mismatch on my TV at home unless a couple of hours after kickoff I happen to notice that the game is close when I’m looking up NBA scores on my YahooSports app. I’m surprised this spread isn’t wider, but perhaps Vegas is trying to lure me in one final time to completely separate me from my final betting dollars as Week 8 comes to a close? Not this time, oddsmakers, I’m on to your tricks. Pats will have this one covered by halftime. (New England, 47-10)

With that, we will move on to what’s become a weekly exercise in predictive futility — the SportsAttic LUCKY 7 guest prognosticator of the week!

Last week’s valiant effort by AC from NorCal came crashing down with a thud at the Patriots 1-yard-line, when the Bears’ last ditch Hail Mary fell inches shy of pay dirt (and a late cover). But like the old saying goes…something about horseshoes and hand grenades. Anyway, a nice try by AC from NorCal, but despite all those good intentions, the near miss brought the collective record of our guest prognosticators to a New York Football Giants-like 1-5. No parades being planned for this bunch, I’m afraid.

Joining us today with the stated goal of turning the LUCKY 7 guest prognosticator battleship around, is Brian the Dolphins Fan, all the way from Little Silver, NJ. While most readers would be excused if they were to question the football chops of anyone admitting to being a fan of the Fish these days (especially after that embarrassment Thursday night — “cover someone, Dolphins, for god’s sake cover someone!”), Brian the Dolphins Fan brings a potent combination of youth’s indomitable insanity coupled with a healthy dose of New Jersey fearlessness. Here he is folks:

Baltimore Ravens (-2.5) over the CAROLINA PANTHERS — “Hi SportsAttic Nation! In the Panthers past two wins they had an improbable 63-yard, game winning field goal against the Giants, and a 21-point, fourth quarter comeback against the Eagles. This week Cam Newton and company are going up against the top defense in the league, the Baltimore Ravens. Baltimore’s defense allows a minuscule, league-best 5.5 yards per completion, and their deep secondary should shut down the Panthers’ air game. Look for the Ravens to bounce back strong from last week’s heartbreaker.” (Ravens, 27-17)

SportsAttic take: I applaud the intestinal fortitude of Brian the Dolphin Fan in going head on after what may be the toughest game to predict on the entire slate tomorrow. I mentioned earlier that I have no idea which way to go on this one, so the safe bet seems to be to follow the Fish Fan’s carefully researched argument, not to mention the wink and nod this spread sends our way courtesy of the boys in Vegas. (Ravens, 24-21).

And that’s it for Week 8 in the NFL — enjoy the weekend everybody!