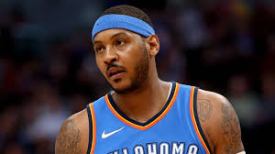 Tonight at midnight eastern time NBA players are eligible to declare free agency, should  their current contract contain an opt out clause, and all free agents can begin negotiating with other teams. There will be nothing in the way of surprises here, as the haves and have nots of “the association” will use the statement above as their guiding light for decision making.

And we’re not just talking about LeBron, who surprised no one with his decision the other day to opt out and test the free agency waters. I (and seemingly all folks interested in the NBA) have dedicated enough time and attention to The King and his future home over these past several weeks, so I believe it makes sense to put the bullshit meter out there for a few other “stars” who have been staring down this decision deadline:

2. You’d think Nick “Swaggy P” Young might just want to shut his mouth and enjoy the ring he was graciously given by the Warriors this season, wouldn’t you? Of course not. It is such a shame that this guy has somehow claimed a modicum of relevance (proving true the old adage that there is no such thing as bad publicity). In case you missed it, TMZ caught up with Swaggy leaving a L.A. nightclub a week or two back, and asked for his opinion on Canada legalizing marijuana. Now it’s bad enough that TMZ sought out Mr. P for his opinion on anything, but then again, who am I to criticize as I sit here writing about him for the umpteenth time since the playoffs began this spring.  Who knows, maybe he’s actually a P.R. idiot savant? Nope, check that, and remove the word “savant” from that last sentence.  Swaggy P’s response to TMZ veered away from the topic of marijuana (to the TMZ reporter’s delight, no doubt) and instead centered in on perhaps the worst cause anyone could ever choose to champion: “I want people to pass cocaine,” he said. “Everybody needs to do cocaine.” My reaction upon reading this latest stunning example of unfiltered idiocy was to think back to the days of the old stand up comedian, Sam Kinison, who would often react to shockingly absurd scenarios by desperately shrieking: “OH OH OHHHHH!!! HE DIDN’T!!! OOOHHHH!!!” followed by horrifyingly  realistic retching noises of the guttural variety.  Yes, he did, Sam. Yes, he did. I can only imagine the look on Warriors GM Bob Myers face as he and the rest of the Dubs brain trust saw that quote in black and white staring back at them on their various phones and handheld devices. I am going to hazard a strong guess here that Young’s days as a Warrior are over. The sad part is that good ole Swaggy P will actually be on some team’s roster next year.  There he will resume annoying teammates, saying outlandish things to throw dirt on his team’s brand in the community, and doing far too little from the three point line during games to justify all his bad acting and baggage. Swaggy P, ladies and gentlemen, role model and modern-day NBA champion.

3. Somebody rescue Doc Rivers, please. He’s a true NBA champion.  Broadly respected by teammates and fans when he was a player, and roundly considered one of the top head coaches in the league for the last decade-plus. And now the Los Angeles Clippers have made it clear to all paying attention that they’ve decided they want a new coach. This decision is well within their rights, but instead of simply swallowing hard, eating the money it will cost to send him on his way, and beginning anew, they are setting out on a course of slow torture. The end game is getting Doc to walk on his own, thus preserving cash and a little good faith with the many players in the league who look up to Doc for his honesty and fiery approach to leading his teams. Why is it that weak organizations (and not just sports franchises, for sure) feel the need to make bad situations worse by taking a cowardly approach to problem solving?  The writing was on the wall for a Clippers tear-down a year ago when Chris Paul escaped to Houston.  If any doubt remained, that was erased by the midseason trade of Blake Griffin to Detroit.  Despite those two crushing blows to any chance for near-term success, somehow Doc kept his depleted squad engaged and in the playoff hunt right down to the season’s final days.  He should have gotten a raise and Coach Of The Year votes.  Instead, in a clear case of an unfair fight for power between Doc (who had in years past controlled most personnel decisions for the club) and the team’s front office hierarchy, the Clips delivered a gut punch by trading Doc’s son. Say what you will about Austin Rivers’s contribution to the team’s disharmony, he’s a capable, starting guard for many NBA teams (such as the Clips). All they got in return for Doc’s son was Marcin Gortat, the definition of yesterday’s prototype NBA center (big and slow with a limited shooting range). And a big contract.  Then Deandre Jordan opts out (can you blame him) with sights set (for the second time) on Dallas, where there is some significant young talent being developed (not to mention no Texas state tax). Doc deserves better. My guess is he’ll do what he’s paid to do and coach up the young Clippers to a better record than the roster talent would indicate is possible, while the paper cuts keep coming his way from the L.A. front office.  Here’s hoping he lands in a place where there’s talent in need of the right guiding hand to go from good to great (anyone else think he might be a great fit in Philly?). He deserves one more run and it sure isn’t happening as the Clippers revert to their historical franchise norm of disfunction and last place finishes.

You really do have to hand it to the NBA. They’ve done a great job of spacing league events in a way that keeps them in the public eye during the offseason.  These days you get the finals running into late-June, followed by the fully hyped NBA draft event (baseball caps and garishly expensive and colorful big/tall suits), giving way quickly to free-agency with annual storylines of intrigue and drama galore.  As those stories play out we’ll have the summer league heating up for the serious hoops wonks among us, and as that wraps up and the last free agent stragglers find their homes for 2018-19, we’ll be ready for training camps to convene.  Let’s give credit where credit is due.  There is no NBA offseason anymore.