Yeah, I watched it, too.

I wasn’t going to, and didn’t really want to, but there is such a dearth of original sports programming on the tube right now… I felt as though I had no choice.

ESPN’s The Last Dance aired Sunday. I knew it would be painful, but didn’t think it could compare to the agony experienced, courtesy of Michael Jordan, the first time around. I was wrong.

Because Michael Jordan was then, and remains today, the enemy. And Scottie Pippen will always be his overrated sidekick. And Phil Jackson is still the gangly, sanctimonious blowhard, who without MJ would never have risen beyond the ranks of quirky assistant coaches.

I started out a Michael Jordan fan. Liked him at Carolina, and had nothing against him when he joined the moribund Chicago Bulls for the 1984-85 season. The Bulls had never been a rival of the New York Knicks, and at that time there was no reason for concern over what the future might hold. As good as MJ was right from the get-go, many fans (including this one) regarded him as a helluva scorer who was incredibly entertaining to watch, but unlikely to ever win big. Because the scorers never did (see Wilkins, Dominique; or McAdoo, Bob).

When the Bulls faced the Celtics in the playoffs back in ’86, I enjoyed Michael’s coming out party like the rest of the country. I took particular delight in seeing him make what was, in my opinion, the best Celtics team ever assembled, sweat a little during their opening-round victory. It was the Celtics who still occupied prime head space when it came to Knicks fans and their NBA arch enemies, and we knew our time was coming with Bird & Co. showing signs of getting old.

For Knicks fans, our fortunes had begun to change during the postseason a year earlier, when we came out of the draft lottery with the first pick and Georgetown’s Patrick Ewing on the way.

Now the seven-foot Ewing was exactly the kind of player that carried a franchise to multiple titles, like Bill Russell had in the ’60’s, and Abdul-Jabbar more recently. When Rick Pitino came to town and began to change our losing culture a couple of years later, aided in large part by the enthusiasm of a young Mark Jackson at the point, the Knicks’ future appeared bright.

SportsAttic Note: It seems unfathomable looking back today, but between the 1987-88 season — Pitino’s first in New York — and the 2000-2001 season — one year after Ewing’s last in New York — the Knicks made the postseason fourteen years in a row, including two appearances in the finals, and another two conference finals. Yes, the New York Knicks! 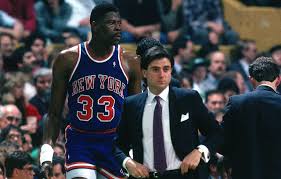 Pitino implemented a frenetic, high-pressure defensive system that featured a lot of full-court pressing, and surrounded Ewing with a bunch of raw, three-point shooting youngsters, and they rode that model to a 52-30 record and the 1988-’89 division crown. They swept the 76ers out in the first round in three straight (including a classless scene where they somehow found a push broom and brought in out onto the Philly floor when Game 3 had concluded) and moved on to the conference semis to face Michael and the Bulls. 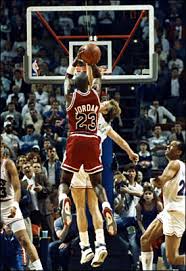 The Bulls had won 47 games during the ’88-’89 season, and upset a 57-win Cavaliers team in the first round, with Jordan breaking hearts all across Cleveland with his jumper (The Shot) to win the deciding Game 5 over an outstretched Craig Ehlo — a moment that is certain to be captured in an upcoming episode of The Last Dance.

Still, the Knicks were division champs, and the Bulls entered the playoffs a seven-seed. We all knew Jordan was a force, but felt Chicago would simply be a stepping stone to the conference finals once Pitino figured out how to stop the Bulls only threat. Not so fast. The Bulls came into Madison Square Garden and stole home court advantage in Game 1 behind 34 points from Jordan, and in doing so sent a message to us Knicks fans that we had a real problem on our hands.

In the next three Bulls wins (they bounced out the Knicks in six games), Jordan went off for 40, 47, and 40 points, and that was the last we saw of Rick Pitino on the Knicks bench. The Bulls and MJ didn’t get past the Pistons that year or the next, allowing us haters our final shot at MJ, saying that as spectacular as he was, he wasn’t a star that could win the big ones.

I really can’t go much further on this topic, because the mere mention of Charles Smith makes me go into convulsions (GO…UP…STRONG…WHAT…THE…FUCK???), but suffice it to say that decade of the ’90’s was a challenging one for the Knickerbockers and their fans.

Pat Riley came along and instilled a toughness, defense, and character that had been missing since the ’70’s, and again we felt our time was near. An assortment of talented players, full of personality and fun to watch, were uncovered by Riles — gritty guys like John Starks and Anthony Mason — and with the early-’90’s upon us, every year felt like it would be the year for the Knicks to return to past glory.

The year where we finally would send Michael Jordan home.

We certainly had our moments, but when the final results were tallied, all we really had to show for our run of success was a deep hatred of MJ. Yeah, we hated Michael, and for good measure we hated his selfish, always-whining toady, Scottie Pippen. We even extended our hatred to the entire city of Chicago, and that ref-baiting, fake-intellectual coach of theirs — Big Chief Triangle (thank you, Jeff Van Gundy).

Charles Smith (Riles! Why was Smith in the game at such a crucial moment? Why?) cost us our best shot to put the sneaker on Michael’s throat in ’93. Then, during Game 7 of the ’94 finals, Starks picked a terrible time to go ice cold, and compounded matters by steadfastly refusing to pass to any of his teammates. A year later there was the missed finger roll by Patrick that sent Indy to the finals, when we all knew 1995 had to be our year.

MJ had given us a two-year window to claim a title while he swung and missed badly at curveballs, and we had come up empty.

And now Michael was back. The GOAT put together another three-peat beginning in the ’95-’96 season, and that run concluded with the film crew on hand putting together much of the footage that The Last Dance is built around. By then Patrick was on the down slope of a magnificent (ring-less) career, and injuries were starting to become a recurring problem for our star.

The Big Fella missed the finals in ’99 (note that Jordan left the Bulls twice during the Knicks 14-year playoff streak, and each time New York made the finals the very next season), leaving us defenseless against a Spurs squad that boasted both a young Tim Duncan and The Admiral, David Robinson. And while there was one more conference finals loss to come against the Pacers during Patrick’s last year as a Knick, Michael had essentially ripped our hearts out over a decade when we had the best Knickerbockers teams of my adult life on the floor, and number 33 jumping center.

And I know, we Knicks fans aren’t the only ones that can look back on those days ruefully. Charles Barkley sits in his TNT studio without a ring today in large part thanks to MJ’s dominance. Karl Malone and John Stockton sit at home, also ring-less. There are more.

I was lucky enough to catch Wilt Chamberlain toward the end of his career. And Kareem from the beginning of his. Magic and Bird at their best were always contenders, too. But Michael Jordan was the best I’ve ever seen — the one and only GOAT.

The pain remains real, watching him all over again. But at least there is the silver lining in knowing that the younger generation of hoops fans can finally gain some understanding as to why us old guys laugh and shake our heads when they claim LeBron James is the GOAT.

It was and is Mike. And it really isn’t close.