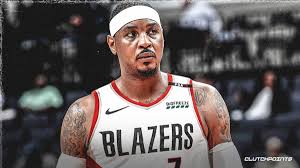 Thank you, Portland, thank you!

Things just haven’t been the same since Carmelo Anthony was summarily dismissed by The Association. And it really seemed like this day would never come. I mean, even King James wouldn’t find a spot at the table for Melo in that purple and gold mish-mosh of “unique” NBA personalities he’s assembling out west. Yeah, the party was over.

But not so fast!

A team desperate enough to add an over the hill, ball-stopping, coach killer has emerged in the Pacific Northwest! And for that, dear Portland Trailblazers, we owe you a debt of gratitude. If anyone out there thinks the Blazers’ signing of Carmelo Anthony isn’t a gift from above, then you obviously overlooked the biggest hint of all-time just a couple of weeks ago, when Melo showed up for the Syracuse-Virginia contest dressed as a colorfully wrapped Christmas present. Put a bow on that man! 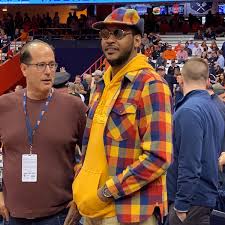 However, this post is not intended to make fun of Anthony, as his play is sure to provide ample opportunity for that in the days and weeks (can he last months? Okay, let’s not get greedy here, kids…) to come. No, this is all about tipping our hat to an organization we actually like — the Portland Trailblazers (SportsAttic Fun Fact — the Blazers currently have the sixth-best all-time won-loss record in NBA history) — for their willingness to insert some drama into the dreary, early-season NBA schedule.

Trying to look at this from the Blazers point of view, I suppose the appropriate response is “what the heck was there to lose?”  Sent packing from the playoffs once again last spring by the Warriors Dynasty, and then failing to improve their personnel over the summer (while almost the entire west retooled), the Blazers currently find themselves in last place, saddled with a 5-9 record.

Their one big summer acquisition, Hassan Whiteside, was recently ridiculed by TNT’s Charles Barkley and Shaquille O’Neal during a halftime show yuck-fest, over his painfully obvious lack of effort, and their one true superstar, Damian Lillard is mired in a horror show of a shooting slump, going an ice-cold 10 for 46 from the field (yikes!) over their last three games (and Portland even managed to win one of those).

And now here comes Melo, likely to suit up for the first time as a Blazer tonight on the road in New Orleans, in a rare winnable matchup against the 4-9 Pelicans. Smart move by the Blazers, sparing Melo the indignity of trying to regain his sea legs last night in Houston, the home of his last ill-fated attempt at hitching a ride to a title run on the back of more talented teammates. 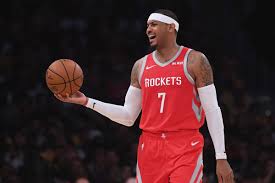 That failed Houston experiment (on the heels of a similar failed experiment the prior season with Russ Westbrook and Paul George in Oklahoma City),

which was expertly terminated by beleaguered Anthony foil and current Houston coach Mike D’Antoni before Anthony was able to completely detonated the already shaky partnership between James Harden and Chris Paul, proved yet again what most of us already knew — the league only will allow one basketball in play at a time (no matter how high-profile the teammates may be, or how loud their whining). Yet apparently Portland intends to test that theory one more time (didn’t someone once say that those who choose to ignore history are doomed to repeat it?), just not with the same flimsy title aspirations at stake that were torpedoed in Houston a year ago, and OKC the year before that. 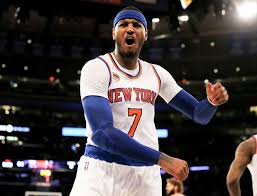 The interesting thing about Anthony, though, is that he also proved to be an unconscionable, me-first, defense-optional, stat-padder when the team was built around him and only him. We are referring to his time in a Knicks uniform, of course. In fact, you could argue that the only time during Melo’s New York tenure that The Garden was truly rocking, took place with Anthony in street clothes nursing an injury, paving the way for the two weeks of Lin-sanity that swept through the World’s Most Famous Arena with such fervor that Carmelo felt no choice but to rush back on court and demand Jeremy Lin be restricted from continuing to run the Knicks’ offensive show.

So we will sit back and enjoy Anthony’s final act for as long as Portland chooses to let it run. Lillard is worth the price of admission on his own, and backed up by the sweet shooting C.J. McCollum, the Blazers have been an eminently entertaining squad for the past several years, despite never possessing quite enough to get over the top and past those dominant Warriors squads. This year’s edition in the Rose City now adds the low-post, shoot-first repertoire of Whiteside to their high-scoring backcourt duo, and that’s the “not enough shots to go around” formula Melo makes his entrance into.

Other than injury-ravaged Golden State dropping off the map, this year’s Western Conference looks to be as strong as advertised. LBJ has his running mate du jour in AnthonyDavis down in L.A., battling for Tinseltown supremacy with the Kawhi Leonard Clips. Utah is improved, well rounded and superbly coached. Houston is still experimenting with Hero Ball On Steroids, this time courtesy of the Westbrook/Harden combo, and many still believe the Nuggets (where Carmelo once actually led a team to the playoffs)

could be the best of the lot. Even Phoenix is no longer a gimme, so, again, desperate times up in Oregon call for desperate measures.

And desperate measures, in this case, mean Melo in Rip City. Let the fun begin folks, and Happy Holidays to all!