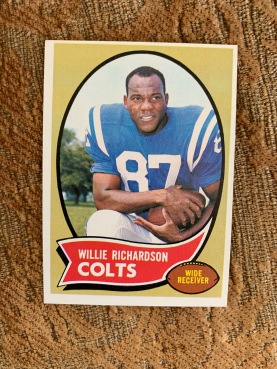 Willie Richardson of the Colts was my first card. Well, maybe not the first card, but somehow I remember that he was part of that first tantalizing pack of Topps football cards I opened back in the fall of 1970.

And with that pack (I don’t remember the gum, but I’m guessing it broke in my mouth and a shard of the razor-sharp, pink rectangle cut the hell out of the inside of my cheek), a whole new world to explore opened up to five-year-old me.

As an impulse buy, I recently went online and purchased the 263-card set from back in 1970, curious as to how many I’d remember, and what those distant memories might stir in me today. Roughly half of the set brought back vivid recollections of moments, people and discoveries long forgotten. I flashed back to the little kid who’d just moved with his family to Convent Station, New Jersey. A kid who couldn’t read yet, but could identify letters, numbers and colors, and who instantly became obsessed, first with the cool team names, and then the heroes who went to battle for them every Sunday.

Lions, Bengals and Bears covered the familiar and always entertaining animal kingdom. Eagles and Falcons (and yes, Jets) came at me by air. There were even Dolphins from the sea (although I hated Aquaman, easily my least favorite cartoon). Cowboys, Vikings and Giants brought a new dimension to the adventures I watched on television. I asked my parents what a Packer was. And a Steeler. And a Raider.

Looking back, it seems strange at first glance why I identify so closely with the 1970 series, when at that time statistics (a staple to most sports card fanatics) meant nothing to me, and my New York Jets fandom had yet to overcome the fact that I preferred the color blue to green. I collected cards every year that followed, but the 1970 shoebox far outnumbered what I added in ’71 or ’72. Why was that, I wonder?

Well, it had everything to do with my sister.

AtticSis was born on November 1st of 1970. And in what I’m sure started as a way to make sure that older bro didn’t feel ignored, or like so much of yesterday’s news, a pack or two of Topps would be thrown my way whenever my parents came into the house and made a beeline for the new arrival. The folks quickly recognized my newfound passion for the cardboard treasures, and in their desire for peace and quiet while getting my sister acclimated, they used the football cards as a sort of five-year-old boy catnip to keep me the heck out of the baby fray.

To give my mom some rest, a nice lady would come by the house a few days a week that November and December, helping out with my sister a couple of hours at a clip (time has erased her name from my memory, so let’s go with “Mabel” as a place holder). Sports karma being what it is, Mabel happened to like and understand football. She noticed my fascination with my football cards, and while AtticSis would sleep, Mabel would explain to me critically important concepts, such as how to organize my cards by teams, using the colors of the players’ jerseys and the identifying letters and colors that surrounded the team names at the bottom of the cards (I knew the alphabet and could count, but hadn’t yet mastered that first-grade construct of putting them all together into the words and stats that would occupy much of the next 50 years of my life).

Mabel supplied me with rubber bands to separate my cards by individual team, and would patiently read me the factoids on the back of the cards — cleverly set up by the evil geniuses at Topps to be revealed by rubbing off a light film with the side of a coin to show a cartoon of the player in question — as I fired away a constant stream of questions.

Thus it was that after my cards arrived in the mail this week, and I began to flip through my new/old 1970 Topps set, that I immediately recognized Don Herrmann. Herrmann was an otherwise forgettable wide receiver on bad Giants teams of the early-’70’s. But he was unforgettable to me for how his cartoon doppleganger clicked his heels on the back of his football card as he hauled in a 62-yard TD back in 1969 (for years I tried in vain to mimic the Herrmann grab, both heels off the ground in a “clicking” motion while flailing at a spiraling TD pass from the sky).

Next there was the Colts’ Mike Curtis, a damn good linebacker on those Baltimore teams back in the day. I remembered Curtis not for the years of stellar play in the middle of the Colts defense, but for the cartoon hit he was putting on a skeleton, in his sketch on the back of his card (like many five-year-olds of the time, I was a sucker for skeletons).

But my most lasting, back-of-the-card cartoon impression was of the great Jim Marshall, who accomplished so much in his career as a dominant defensive end for the “Purple People Eater” Vikings defenses of the ’70’s. But as I looked at Marshall’s card, the only memory that mattered was his ill-fated, “wrong way” moment, when cartoon-Jim recovered that fumble and took it to the house — only to the wrong house, securing a safety for the other team.

It is plain scary what the memory records from decades ago, when I’m hard pressed to remember what I had for breakfast this morning. 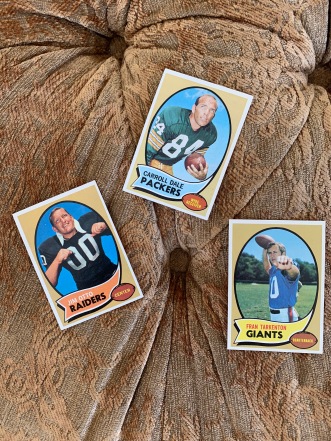 Of course those gloriously staged Topps pictures on the front of every card lodged deep into my early-in-its-development cerebral cortex back then also.

I look at Carroll Dale, a veteran wideout on those legendary Packers teams of the ’60’s, and today I see a handsome, 32-year-old athlete. But what I remember, is that for some reason I decided as a five-year-old that Carroll Dale was the ugliest human being I’d ever laid eyes on. I couldn’t bear to look at his card without immediately hiding it in my Packers pile, buried under Bart Starr and Gale Gillingham, not to be stared at too long, lest I turned to stone.

Jim Otto, the Hall of Fame Raiders center, locked into my head for different reasons. For one, he was the only player in my entire collection who wore double-zero, which five-year-old me simply didn’t get. What a horrible number choice! Plus, he wore this cool, pointy, horseshoe-looking thingamajig around his neck that, to this day, I’ve never gotten a satisfactory explanation as to the purpose it served.

And to show how our minds play tricks on us over time, I think back to taking my turn at QB in our front yard pickup games with the other kids on my street. Fading back to pass, I’d always extend my left (non-throwing) arm forward, hand clenched in a fist. Why? Because that’s how the Giants’ QB, Fran Tarkenton, did it on his football card. I’ve held onto that memory of the Tarkenton card as fact for damn near 50 years, until last night. When I pulled out the card and took a present-day look, I realized in horror that the scrambling signal-caller’s hand is not in an actual fist, but more of a curl. Huh, you don’t say…

Oh well. The fist still made me feel cool when I was looking downfield for Pete from across the street on a crossing pattern. 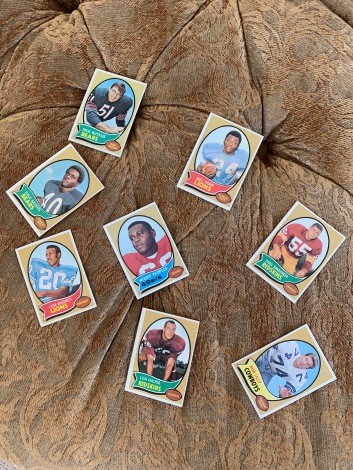 Mostly, though, the NFL names of the day captured my imagination.

The fact that Gale Sayers played for the Bears and that rhymed, made me laugh out loud every time I said it. The Lions’ Lem Barney was a terrific cornerback, but all that mattered to me was that his last name happened to be the same as Fred Flintstone’s next door neighbor.

That Len Hauss spelled his name differently than the “house” I lived in didn’t matter either, because when Mabel read that one to me, spelling was a mere detail that wouldn’t matter for at least another year, and I found the Hauss/house coincidence delightful. Woody Peoples? Even at the age of five, I knew that “peoples” wasn’t a word. Hah!

I recall regaling the three kindergartners who had the misfortune of sharing our four-chair table with me in Mrs. Krimmel’s morning class at Normandy Park School, over how the Lions had a running back who’s name was “far.” Mel Farr to be exact, but it wasn’t close. Get it? That was a real knee-slapper back then.

But the two grandaddy’s of them all, when it came to a kindergartner’s doubled-over, gasp-for-air-hilarious, football player names, belonged to the Redskins’ Chris Hanburger, and Dick Butkus of the Bears. No explanation necessary. 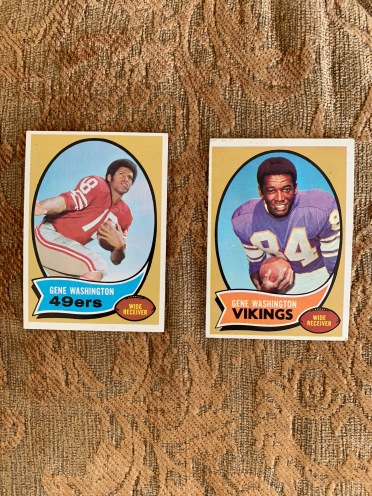 However, maybe my favorite discovery came the day Mabel explained to me that due to some mysterious confluence of events, the NFL currently boasted two Gene Washingtons! How could that be, I wondered? At this stage of my cognitive development, it didn’t compute that there could be people in the world who shared the exact same name. I could barely contain myself as I explained this phenomenon to my kindergarten seat mates the next morning, hoarsely whispering “and they both play wide receiver, too,” needing to get that last tidbit out despite the shushing coming from Mrs. Krimmel at the front of the room.

Yeah, it was a cool way to spend a Friday night as I sifted through the 263 pieces of cardboard that connected me to a time of innocence and wonder. A few hours spent revisiting how lasting memories form and latch onto us over time. Emerson Boozer, Spider Lockhart, Bubba Smith, Ben Davidson, and the rest. All of them in their prime, glory years, captured in colorful cardboard and planted in the impressionable mind of a soon-to-be NFL lifer.

And would you believe me if I told you there was even one card in that 1970 series of a young wide receiver who also happened to be the “World’s Fastest Human?” There he was, in his Cowboys home whites, smiling for the camera and proudly showing off that familiar, blue number 22. Talk about capturing the imagination of a kid who lived for this sort of thing!

Well, thanks to Topps 1970 football cards, we also know that the “World’s Fastest Human,” Bob Hayes of the Dallas Cowboys, was a partner in a printing firm. 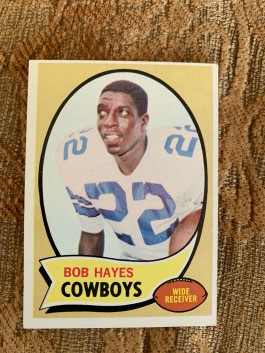 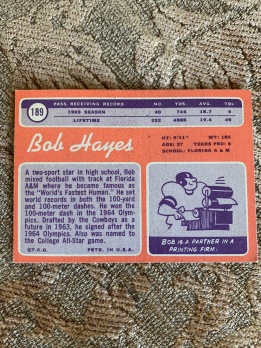