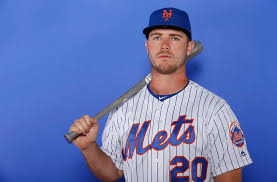 Today wraps up Major League Baseball’s first half, and even though statistically we are beyond the actual 81-game midpoint (games played by teams thus far range from a low of 86 by the White Sox to a high of 93 for the Mariners), there are some interesting questions bubbling up within the statistics that drive the game for hardball nerds like us.

Such as, was it really necessary for the Mets to absolutely bombard social media today when Pete Alonso hit his 30th home run this afternoon? Yes, it is an absurd and unexpected total for the big rookie, and even cooler is the fact that it tied a record set by Dave Kingman (Kong!) 43 years ago. But c’mon — Alonso’s two-run shot made it 6-2 Phils, in a game Philly would win by a score of 8-3. In other words, it was a meaningless homer. This is a glimpse into what Mets fans can likely expect out of the season’s second half.

But for about 27 other MLB teams (sorry Royals, Orioles and Marlins), there remains a lot to play for, and with all due respect to Polar Pete, he’s not getting to 50 round trippers this year folks. I call that a “FACT.”

And as I pored over the statistical tables this afternoon, I wondered about the likelihood of other stars sustaining their first half numbers with the dog days of August beginning to cast their ominous shadow in the distance. So, here’s a few quick hits for consideration over the next several days while we wait for real baseball to resume:

*Christian Yelich is now a combination of Barry Bonds (without the steroid-inflated head) and Roger Maris circa 1961, and will rewrite the MLB record books over the balance of his career. “FICTION”  Yeah, Yelich is on pace to challenge the 60 homer mark as a nice encore to his torrid 2018 second half that won him an MVP out of nowhere, but let’s not put him in Cooperstown just yet. I can see 50 dingers easy out of that sweet swing of his this year, and here’s hoping the Brew Crew make the playoffs, because this guy is so much fun to watch, but he’s actually not even the best player in the NL right now.

*Cody Bellinger will continue on his tear and become “the lefty Mike Trout,” soon rivaling the Angels superstar for “best in game” status. FACT  The kid’s plain scary right now, and while I don’t envision Bellinger challenging the 60 dinger level this year either, I do see him maintaining a level of excellence that will earn him his first MVP come the awards season. And let’s not forget this guy plays defense, too — at multiple positions, no less — and possesses one of the best arms in baseball. A beast.

*The Dodgers will keep up their .660 pace, win 105 games, make their third straight World Series and win this one. FICTION  Yes, they are darn good. Like they were two years ago, when manager Dave Roberts gift wrapped the 2017 World Series for the Astros. If they can stay healthy, the Los Angelenos should definitely cross 100 wins and be heavy favorites to make their third consecutive Fall Classic. But get the Buffalo Bills jokes ready — they will be on the wrong side of the championship outcome yet again.

*The Braves will be the only NL team not named the Dodgers to win 100 games this year. FICTION  Everybody loves the Bravos right now, but it is a long season, and even with the benefit of facing so much bleh in their NL East-heavy schedule, they won’t get to the century mark. Pencil them in as division champs (again), but this one won’t be a layup for the young Atlanta squad.

*Jeff McNeil will keep up his scorched earth pace and lead the majors in hitting this year. FICTION  You get the feeling when watching McNeil that if he wasn’t batting leadoff for the Mets he’d be in an alley somewhere tossing tin cans in the air and smacking them with a broom handle. He’s the ultimate “see the ball, hit the ball” savant, but when you are named an All Star in your first full season in the bigs and go into the Midsummer Classic leading both leagues in Batting Average, your days of sneaking up on folks are numbered. If Alonso remains hot hitting behind him that would be a huge boost, but both these kids are subject to the ups and downs all young ballplayers go through.

*Josh Bell will finish the year with over 50 home runs and 50 doubles. FACT  I’m sorry, but where did this guy come from? I know, he went for 26 and 90 two years ago, but when he slid to 12 and 62 last year I stopped paying attention. Now I look up and the guy is taking 30 HR’s and doubles into the All Star break? In 1995 Albert Belle reached 50 in both doubles and HR’s, and since then? Nobody. Before Albert Belle? Nobody.  This is effin noteworthy, gang! Here’s saying Josh Bell will join Albert Belle in this historically exclusive MLB club. What will make it even more fascinating, is to watch Josh’s pursuit of 50/50 continue should the Pirates manage to buck the odds and remain in contention. Albert Belle’s Indians were a powerhouse in ’95, and his stats benefitted from that loaded lineup. Josh Bell equalling that feat while playing Pirates games in a pennant race with little lineup protection? Yes, that would be incredible.

*The AL division leaders heading into the break will all still own the top spot when the regular season concludes. FICTION  I haven’t been a Twins buyer all year, and I’m not jumping on the bandwagon just yet. For those still paying attention to the AL Central, the Indians are beginning to play good ball, while Minnesota has leveled off just a bit. A 100-win pace and chance at home field in the ALDS seems like way too much too soon for the Twinkies, so here’s predicting that they end up in a division dogfight down to the season’s last weekend. And finish second to the more experienced Indians. As for the Yanks in the East and the Astros out West? Yup — you can write down that ALCS matchup right now.

*The Red Sox will not defend their World Series title in this year’s postseason. FACT  Outside of Boston, is anyone really sad about this one? Enough winning in Boston already, right? Everything went right last year for the Sawx, and in keeping with the Bosox pattern of taking a year off after winning the World Series, this club hasn’t smelled right since they chose to begin the season with no established closer. There’s still a ton of talent in Beantown, but they also face the toughest division competition, something the Indians/Twins and the A’s don’t have to concern themselves with. See ya next year Red Sox. This year’s AL Wild Card will feature the A’s versus the Twins (and please, please, please send the Twins home and spare us the pain of watching them roll over once again in a playoff series against the Yankees).

*Gabe Kapler will be the Phillies manager for Spring Training 2020. FICTION  Yes, the rock headed Philly field general has outlasted my preseason predictions of an early shit-canning, but that’s simply because he’s gotten to play the Mets so frequently. Talk about underperforming expectations? Somehow I’m guessing that when Phillies owner John Middletown talked about spending so much money this past offseason that it could even be “a little bit stupid,” he didn’t envision Kapler sitting around .500 at midseason. Kapler may make it through the regular season, but he’ll be back doing vitamin supplement videos on YouTube TV by November.

*The Mets are hopelessly out of the Wild Card race heading into the All Star break. FICTION  They are only seven games back in the race for the second wild card. And that is seven back of the Phils! My buddy Palmer texted during yesterday’s game saying that if the Mets were to pull out a win, it would be the catalyst for a historic run to the playoffs (the Mets won, 6-5). Now Palmer’s texting history is littered with preposterous claims, but there are 70 games still to play, and no one is distinguishing themselves in the NL outside of Los Angeles and Atlanta. The Mets have had just about everything go wrong that could, yet the league hasn’t run away from them. If (and yes, this is a BIG IF) BVW’s key offseason pickups (Cano and Diaz) revert to their historic norms and the young bats keep producing? Well, stranger things have happened (and besides, look at this paragraph’s heading — we’re merely stating that the Mets aren’t “hopelessly out of it”), and I can’t get excited about any other mediocre NL club. So let’s sign up for the Dodgers and Braves remaining 1 and 2 in the NL seedings, with Milwaukee thrown in at 3 (Yelich vote). The play-in Wild Card game? Let’s go Cubs-Mets, with deGrom coming up big to advance the Mets and seal the fate of Joe Maddon getting dismissed the day after the postseason concludes.

One thought on “MLB Midseason Stats: Fact or Fiction”