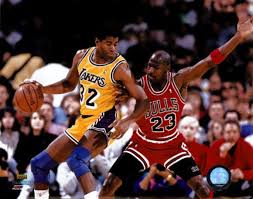 Tell me if any of this sounds familiar.

A 31-year-old point guard. A franchise synonymous with winning NBA titles. Series-altering injuries to two of the point guard’s key teammates. An opponent featuring a superstar on the rise, who in addition to his considerable talents in putting points on the board, knows how to play suffocating defense, and is capable of willing his team to win. 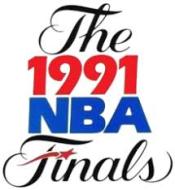 You guessed it. We aren’t talking about the 2019 NBA Finals, but we may as well be. In this case, the finals in question took place in June of 1991. The 31-year-old point guard was Earvin “Magic” Johnson, only five months prior to him shocking the world by announcing he had contracted the HIV virus and would be retiring from the NBA.

The 27-year-old superstar? None other than SportsAttic’s NBA GOAT — the incomparable Michael Jordan.

I’ve been thinking of the parallels between this year’s NBA Finals, where the heavily favored Warriors find themselves on the brink of elimination prior to Game 5, and the 1991 finals that featured a tired Magic and injured Lakers running mates trying to squeeze out one last title triumph from their battle-fatigued bodies.

Since the beginning of this year’s finals, with Kevin Durant on the shelf due to a partially torn calf, and Klay Thompson gimpy due to a tender hammy, the similarities between that 1991 matchup and today’s have been striking to me. Then, the other day, an old friend posted on social media a suggestion that perhaps the Raptors of 2019 were a reincarnation of the 2004 Pistons. Hmmm…

I like my friend’s comparison, particularly since the Pistons of ’04 were an unheralded group that entered the finals heavy underdogs and parlayed unselfish teamwork into an unexpected title. Those ’04 Pistons were a team that played better together than any of their individual parts would have suggested, and one that came out of nowhere to upset a heavily favored Lakers team that had won three of the four previous NBA titles.

However, the difference between the comparisons of today’s Raptors and those ’04 Pistons, as opposed to the ’91 Bulls, lies in the fact that the Raptors, for as well as they are playing as a team right now, are riding the superhuman efforts (on both ends of the court) of Kawhi Leonard. The Pistons were a team with no single superstar, whereas those Bulls…

Well, yeah, they were all about MJ.

Let’s take a look back for a minute.

The 1990-91 Bulls went 61-21 during the regular season, but were a team that had been dispatched by the NBA-champion Pistons each of the prior two seasons. At the time, the ringless Jordan was recognized as the greatest individual basketball player in the game (key word “individual”), but had not yet earned the other-worldly distinction of “World Champion Superstar,” one who makes the teammates around him better.

The intense jealousy/dislike I would develop over time for MJ was only in it’s infancy back in ’91. His Bulls had sent home the favored, Rick Pitino-led Knicks in 1989’s conference semis, and I began to dislike Michael then, perhaps sensing the pain he was only beginning to inflict on me and my Knicks-fan brethren. Chicago swept the Knicks out in Round 1 of the 1991 playoffs, and had only dropped one game heading into the finals. I wanted the Bulls to lose mostly out of Knicks-fan bitterness, not realizing just how painful Michael and the Bulls would make NBA seasons to come for the New York Knickerbockers and their fans.

Along the way to the ’91 finals, MJ and the Bulls exorcised their Pistons demons, sweeping the defending two-time champs in the conference finals, where the Pistons (led by that all-time classless worm, Isiah Thomas) had walked off the court and into their locker room with time still remaining on the clock in Game 4, rather than shake hands with the new eastern champs.

Like Kawhi Leonard today, Michael was 27 years old and at the height of his athleticism. Jordan played in all 82 games during the 1990-91 season, averaging 37 minutes a night, while scoring 31.5 with 6 rebounds per and 5.5 assists to boot. Because of MJ’s ability to fill out a box score on a nightly basis, it was easy to ignore that he was also becoming the game’s preeminent defender, and with the addition of wingman Scottie Pippen a couple of years earlier, Chicago had begun to show the two-way dominance that would ultimately define the MJ title years.

But remember, at this point, there had been zero Bulls titles. And this Knicks fan was a little tired (already) of all the MJ hype for a guy that hadn’t won anything. So heading into the 1991 NBA Finals, my prediction (yeah I’ve been making impetuous and preposterous prognostications for a looooong time) was for a series where the great Magic Johnson (like Steph Curry today, a 31-year-old former MVP) would be able to neutralize Jordan, while Magic’s superior supporting class of Lakers (featuring James Worthy, Byron Scott, Sam Perkins and a young Vlade Divac) would turn the series in the direction of the Lakers, delivering them the title. Not so fast…

The Lakers actually went into Chicago and won Game 1 of the finals that year, thoroughly convincing me of my predictive genius. MJ and the Bulls came back and won Game 2 at home, but the Lakers were happy to head back to L.A. knowing the next three games would be on their home court (ahhh the days of the 2-3-2 playoff format). Game 3 foreshadowed what was to come, though, because with both teams at full strength, the Bulls emphatically pulled away in the second half to go up two games to one.

The Lakers were on fumes, showing the wear and tear of annual trips deep into the playoffs during the decade of the ’80’s (wars waged against the likes of Moses, Dr. J and the Sixers, Larry Legend and the Celts, etc., — the era of heavyweights during which Magic had garnered his five rings).

Kareem had retired after the ’89 finals, where Detroit had bullied their way to the first of  their two championships in a row, and the Lakers had fallen in the western finals in 1990, their first in memory with no Abdul-Jabbar in the middle. So this was not the Showtime Lakers of the mid-’80’s by a long stretch.

In the playoffs, their time on the court ratcheted up dramatically, with Magic averaging 43 minutes a game in the Bulls series (in fact, in the  ’91 finals — Magic’s last — he averaged 18.6 points, 12.4 assists and 8 boards — unreal stats nobody talked about because Michael went for 31, 8 and 6). And Magic wasn’t alone in leaving it all on the court one final time. The aging Lakers had a thin bench, and coach Mike Dunleavy had little choice but to ride his veterans, with Worthy averaging 40 minutes a night throughout the playoffs. Dunleavy also drained Perkins for his own 40 minutes a contest, and Scott for 38. In other words, Los Angeles was flat out gassed.

Would a healthy Lakers squad have been able to salvage one or two of the remaining games in L.A. and extend the series back to Chicago, where they’d benefit from a couple of days off for travel? We’ll never know, because in Game 4 Worthy came down the wrong way with a third-quarter rebound, and badly sprained his ankle, effectively ending any chance of a Lakers rally to even the series that night. To further compound the trouble, in the fourth quarter Scott collided with “Medical” Bill Cartwright, severely jamming his shoulder.

Both Worthy and Scott would be forced to sit out Game 5 as the Bulls closed out the series on the Lakers’ home court. Magic was brilliant in what would turn out to be his swan song, posting the second of his two finals triple-doubles that year, despite being shadowed every step from the inbounds pass on by Pippen and Jordan in the backcourt, then to be picked up at mid court by the long-armed Horace Grant. Effectively facing a three-on-one in Game 5, with Magic’s two primary scoring options in street clothes on the bench, the game was over before it started and the Bulls were champs, 108-101.

Now the point here is not to make the claim that Kawhi Leonard and his suddenly emboldened supporting cast, playing excellent team defense and executing their roles within the Raptors game plan flawlessly thus far in the series, will go on to form a MJ-like dynasty (heck, Kawhi won’t even be in Toronto next year). The point is that the NBA, for nearly 80 years now, has featured multiple torch-passing moments.

We saw one last year when the Dubs swept LBJ all the way to L.A. We could be seeing another one right now. There is no denying Steph Curry’s brilliance, but at 31 and showing the worn tire tread that accompanies five consecutive finals appearances, the Warriors team we will see tomorrow night may be closing the chapter on this phenomenal run.

The brilliance that is Kawhi (on the verge of his second career ring, but first as the go-to superstar), will likely take up residence in another locale for the 2019-20 season (SportsAttic’s call is that Leonard will assume the KD role alongside Steph in a Warriors-2.0 configuration, christening their new San Francisco home and kick-starting another run of titles for the lucky fans by The Bay). In addition to Kawhi’s brilliant offensive numbers this postseason, he’s instilled toughness and confidence in a franchise that’s shown little of either prior to his arrival.

Like MJ during the 1990’s, Leonard’s defense may be the most impressive, and least talked about, component of the arsenal he puts on display for the fans every night. And his teammates are following his lead and just played two of the best back-to-back road contests we’ve seen in NBA Finals history (since 1991, in fact).

No, this series isn’t over. The saying “a standing champion is still the champion” is particularly appropriate when applied to the 2018-19 Golden State Warriors. The talent is still there, and just maybe we’ll see KD take the floor Monday night. They still have 31-year-old Steph, who only needs to point to his Game 3 performance to remind us of the herculean capabilities he still possesses.

But it sure feels like that torch is again in flight. And the enormous hand of Kawhi Leonard appears poised to grab it. Based on what we’ve seen through these playoffs, he may hold onto it for awhile. 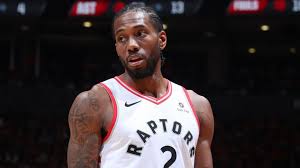