If I’m ever going to get a prediction wrong, this was the one. I really did think the Yankees would send the Red Sox home in the ALDS, but I must admit there was a teensy bit of passive aggressive, reverse psychology going on with that pick.

Because if you haven’t noticed, I’ve been on a pretty brutal run with my predictions of late. Leave it to Aaron Boone to revert back to regular season form, after showing signs of managerial competence in the Wild Card game, to send the Bombers to the offseason  early this year.

And hats off to Alex Cora, the other “player friendly,” first-year manager in this series, who pushed the right buttons in winning both games at Yankee Stadium to reaffirm that the Sox really are a good team (as if 108 wins wasn’t enough for some pundits — ya know, like yours truly). Cora’s lineup changes, as well as the aggressive tone he instilled in his troops from the first pitch in Game 3, turned this whole thing around when it appeared the Yanks had all the momentum after stealing the home field edge in Game 2 up in Boston.

So it goes to show you, just when you think you have things figured out in this baseball  postseason, there’s always the potential that Aaron Boone will freeze up and stick with his starters too long in the most important games of the year, despite having the world’s greatest bullpen at his disposal. Oh well, tough break for Yanks fans, but we’ll muddle through here at SportsAttic, even if I am now officially without a team to root against for the duration of the playoffs.

On to the Baseball Final Four, and as we prepare to ID our 2018 World Series combatants, here’s a list of things we’ve learned through the first round of these playoffs (I’d say Wild Card, too, except all four Wild Card teams are now out — as it should be):

*I don’t think I’ve given the Astros enough credit for what they accomplished in defending their title this year. That’s a damn strong team, and I’m saying that not just because they torched my choice for 2018 World Series champs in the last round. No easy outs in that lineup, and some big time guys who step up in crucial spots — Altuve, Springer, Bregman — but their incredible depth goes deeeeep beyond just those stars. I mean they had Carlos Correa hitting seventh in Game 3 (yeah, I know he’s not right physically, but he’s supposed to be the next A-Rod, right?)? And Marwin Gonzalez?? Enough already. Tough outs.

*I would have liked to see the ‘Stros pen challenged a bit more by the Indians, as I do see that as their potential Achilles heel, but does it matter with that rotation? When you can throw a former Cy Young winner and one of the AL’s top lefties out in the three-hole of your rotation, that’s some serious pitching depth. Dallas Keuchel is still a darn good starter, and that lefty curveball following the gas from Verlander and Cole will screw a lot of hitters right into the ground. I’m looking forward to seeing how Boston and their parade of professional hitters handle the Houston starters.

*In fact, whoever gets to the bullpen first will probably win the ALCS. I’m leaning toward Houston, since I think a rested Verlander (at least two starts, and then one late relief appearance, if needed), Cole and Keuchel trump a still-rusty Chris Sale, Eovaldi and Porcello (Morristown, NJ in the house!). By the way, why the heck did Porcello come out of last night’s game after 5 innings? He’d thrown less than 70 pitches and the Yankee bats can’t touch his soft stuff around the corners. Did he ask out? Can’t imagine Cora wanting to remove him that early and go to his miserable pen. That unexplained exit cost the Sox  Sale for his inning in the 8th, adding valuable pitches to the ace’s odometer. Stay tuned on this one.

*And yes, notice I didn’t reference David Price above. Is he simply done? Against the Yankees he sure looks like it, and he isn’t going to find life any easier with that Houston lineup, but here’s hoping he can contribute positively at some point in the upcoming series. I don’t particularly like either team, but who doesn’t like a reclamation project, even one that’s being paid something like $10 million bucks every time he gets shelled. The poor (probably not the best adjective to use when describing Price) guy was positively vilified after the latest in what has now been years of bad playoff outings. Give him the ball for Game 4, Cora, and let’s see what happens!

*Sorry, but I need to go back to the Yankees well one more time, as I don’t believe my opener on the Aaron Boone foibles properly captured my elation over their early elimination. There is no Yankee I am happier to see going home than Luke Voit. This guy had to be the overgrown bully that picked on the small kids back in middle school. He got hot for two months and has pranced around like he’s waiting for them to complete his bust for Monument Park. Here’s hoping when we next see ole Luke, he’s remembered why he’s been a career Triple A player, and is ready to become the next in line of that distinguished Bronx rogues gallery featuring the likes of Kevin Maas and Shane Spencer — one-year wonders that never amounted to anything. Okay, I feel better now.

*The Dodgers are the best team in the National League, and the Brewers are the hottest. Who do you like?

*The NLCS is a cool matchup for baseball fans, as it pits the traditional “strong starters and terrific closer” Dodgers, against the next-gen “opener and a cast of thousands” Brewers and their outstanding bullpen. I’m sticking with my call of the Brew Crew here, falling back on my “something’s been rotten in Dodgers Denmark” feeling that I’ve carried with me since May.

*Not to mention, I’m not sure I can handle watching Dave Roberts manage the Boys in Blue out of another World Series against the Astros. Last year was plenty for me, and even if it does appear that Roberts got it right with his head-scratcher of a decision of letting Ryu go in Game 1 in front of Clayton Kershaw, the law of averages is waiting to come crashing down on the overmatched Dodgers skipper any minute now. 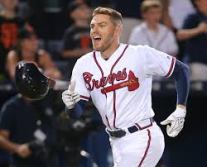 *And a quick post-mortem on the Bravos. Never really competitive in the NLDS, I still couldn’t help be a bit green with envy over the obvious bright future that team has with all that young talent, both in the everyday lineup and on the mound. My biggest hope is that they come of age while Freddie Freeman is still raking. Freeman is simply a beast, thriving on big spots at the plate, making every play in the field look routine, and doing it all with extreme professionalism. Maybe I’m just happy to see him taking some team other than the Mets to the woodshed for once, but this guy is a flat out superstar, and assuming another year of growth from Acuna and Albies, the Braves could be the NL team to beat in 2019.

*I’m curious to see how Milwaukee manager Craig Counsell does in the NLCS. I saw very  little of the Brewers this year, so I have no idea if he’s any good or not, which already means that he has the advantage over Roberts (who should have been removed before the postseason began). How Counsell got Milwaukee to nearly 100 wins with no front line starters to speak of makes me think he knows what he’s doing, and yeah he’s got a tremendously talented and deep bullpen. But then again, so did the Yankees.

*Oh yeah, it would appear that Yelich kid is pretty good, too. 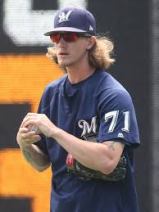 *And is Milwaukee reliever Josh Hader actually Chris Sale’s little brother? All skinny arms and legs flailing around with big time gas to follow? How Hader isn’t the Brewers’ closer I don’t get, but I suppose Jeremy Jeffress is also super effective at the back end of the pen. I’m conflicted when watching Hader, as I find his funky delivery and aggressive approach an entertaining, throwback style, but his ignorant, racist tweeting history  makes it hard for me to root for him. Yeah, I know, he was just a teenager then. Now he’s 24 and mature. Uh huh.

*Ron Darling is by far the best baseball announcer on the planet. It isn’t every day you get to hear a guy talking baseball bring up the term “standard deviation” and not come across as a pompous Yalie. Somehow Darling pulled off just that the other day. The whole brouhaha over the terminology he used during Tanaka’s last start was ridiculous, and Ronnie even handled that one with aplomb, offering a perfectly toned “apology” without admitting remorse for his completely innocent comment.

*Can someone clue me in to the meaning of the Craig Kimbrel arm hang routine? When he was doing his best to choke the three-run lead in the 9th last night, I found the arm hang increasingly annoying. I wonder if he will continue doing that when Father Time catches up to him (like he does with every reliever not named Mariano Rivera), along with the rest of the league’s hitters. Based on the subtle but still notable decline in Kimbrel’s velocity and effectiveness this year, we may get to find out in 2019.

*J.D. Martinez sure can mash, and I take more pleasure than I should when comparing his enormous impact on the Red Sox this year to Giancarlo Stanton’s on the Yanks, but man is the guy slow! In a series that included human glaciers Gary Sanchez and Christian Vazquez, that’s really saying something. Maybe we can turn this into an event at an upcoming All Star Game? How about a 100-yard dash for the slowest players on both squads, as voted on by their peers? Final round waddle-off between Martinez for the AL and Jesus Aguilar for the NL? I’d buy a ticket for that one.

*Second to last MLB Predictions of the Year: Astros in 6 games, and Brewers in 7. I can practically hear MLB weeping already, as they say goodbye to the major TV markets in Boston and L.A.

We’ll close with this tidbit from Geno the Sox Fan, who points out that the Indians, the Braves and the Redskins (Washington Football Club) were all killed this Columbus Day. Hmmmm…