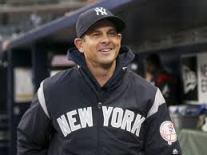 Game number 163 came and went for four playoff teams today, and none of the things I wanted to see happen happened. Actually, that’s not correct. I was happy with both outcomes, as I’m more intrigued by the Brewers the more I watch them, and I am least enamored with the Rockies in the National League, so I am happy to see them with a chance of going home for good tomorrow.

That being said, I didn’t get to see Christian Yelich utilize an extra game on the schedule to take the Triple Crown (what an awesome story that would have made). He came up with two on in the 8th, and I was certain that was it, but no dice. Even though my vote (if I had one that counted) would still go to Javier Baez, it’s hard not to tip the cap to what Yelich has done in leading the Brewers to home field advantage for the remainder of the NL Playoffs.

I also didn’t get to see Dave Roberts sweat any big decisions that could have cost the Dodgers the division. And that’s another reason I’m glad the boys in blue won today. Now I’ll have the entire NLDS to enjoy Roberts’ foibles and see if he can manage to keep the Braves in a series they enter completely overmatched.

However, now the playoffs begin for real, and with them come lots of questions to be answered. Let’s start with 20 of them: