Sometimes prayers do get answered. For those of you praying for a SportsAttic post that will be less than 1000 words, today is your day. For the rest of us beginning to grow restless for some more NBA offseason intrigue — thank you Houston Rockets!

Yup, he did it. Carmelo Anthony finally signed with the Rockets and made my day. So many delicious thoughts rush to mind, but in the interest of economy, here’s but a few:

*Is there a WAR (Wins Above Replacement) in the NBA? I should probably know this, but am used to only seeing it applied to baseball players.  Anyway, I’m going to put my over/under for wins in Houston this year at 53. Without Carmelo, I’d probably have them at 58 or 59, so in the interest of being kind to their newest benchwarmer, we’ll take the lower (58) number.  Which makes Mr. Anthony a minus-5 in my over-simplified NBA WAR evaluation. That’s not the missing piece to the puzzle, folks.

*And he’ll be coming off the bench! Oh boy, oh boy! Can’t wait for the dissension to creep into this scenario.  The other night I saw the clip of ‘Melo laughing incredulously at the thought of him beginning games on the bench in OKC last season. I somehow can’t imagine he’s mellowed (no pun intended) that much in a year.  Stay tuned, this is sure to be as entertaining as watching him refuse to rotate on defense.

*I will be overjoyed every time I get to see Harden grimace when Anthony blows an offensive possession with a poorly selected shot this year.  Here’s hoping The Beard is enjoying his MVP this offseason, as he’ll never sniff another one. And I’m guessing he knows it, too.

*And yes, this is piling on, but hey, Chris Paul, how ’bout suiting up for Game 6 and 7 next time, huh? Still can’t get over that… 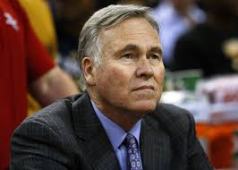 *Last but not least, get used to the expression above from poor (he should adopt “poor” as his legal first name given the number of times it’s about to be used in this fashion over the course of the coming season) Mike D’Antoni. It’s a look that combines “I can’t believe I fell one win short of a championship series yet again” with “okay, he can’t shoot anymore, never played defense, and has a bad attitude, made even worse by the fact that he hates me…” and “why did I ever decide to shave my mustache, I have an enormous upper lip.” Guessing D’Antoni retires at the end of 2018-19, after losing in the first round to the Thunder (or even better, LeBron and the Lakers).

I was going to end it there, but I’ve still got a little baseball on the brain.

So, one final thought from Major League Baseball — perhaps the Oakland A’s are truly creating something special this year?

The baseball gods tried to derail their phenomenal, league-best tear since the beginning of June, by delivering them Jeurys Familia via trade from the Mets at the deadline.  Familia was doing okay in a setup role until last night, when he was brought into a lopsided 7-3 affair and asked to get the final three outs.

No surprise to Mets fans everywhere, but before you could say “can’t throw it in the ocean,” he’d walked the bases loaded without recording an out. A’s Manager Bob Melvin mercifully lifted the big right-hander at that point, and the A’s hung on to win a game the Mets would have managed to lose 10-7, by the razor-thin margin of 7-6.

The big difference for Oakland is that Melvin had lights out closer Blake Treinen to turn to (no, definitely not Jerry Blevins) when he needed to record the final outs. But not before it had become a nail biter for the smattering of fans that toughed out the cool Bay Area night until the bitter end. Last place teams like the Mets don’t recover from that kind of Familia meltdown. Teams with designs on October glory do — go A’s!