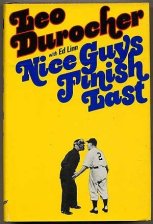 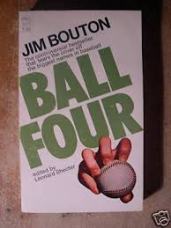 I am currently reading (and thoroughly enjoying) I’m Keith Hernandez, the recently published memoir by the former Mets first baseman and current broadcaster. I actually didn’t expect to enjoy it as much as I have, because I was concerned it might be one of those self-aggrandizing tomes occasionally spit out by former athletes thirsting for one more moment in the sun.

Not the case here, and hats off to Mex (even though he explains in the book that no one calls him that anymore), as he offers us an in depth look at his arduous climb through the Cardinals minor league system as a teenage bonus baby, as well as a humorous and self-deprecating view into his life today as color commentator on Mets broadcasts. Plus there’s a heck of a lot more meat here on the national pastime and today’s game, if you are looking for one last summer read to get you through August.

Before I started on the Hernandez book I had just finished Coach Wooden and Me, by Kareem Abdul-Jabbar. This is another one I strongly recommend, although it is a more sentimental and thoughtful look at a special friendship between the player and the legendary coach. It plays out across the historical timeline of Abdul-Jabbar’s life, and  Kareem shows himself as the rare athlete who has found his voice in a meaningful way after a legendary playing career. I found his thoughts and views on the often-divided and polarized nation we live in today, both insightful and balanced.

I mention these two books, not to plug a couple of recent releases, but as a preface to my own personal reflection on how reading sports books growing up helped shape me, my life and my appreciation for the world of sports and its important place in 20th Century history.

We all need escapes from time to time, and I read a lot in pursuit of just that. When I take a step back and think about what books have always found their way to my nightstand, it’s almost always been a book about some aspect of the world of sports (that or a Stephen King novel — I like the scary and supernatural, too).  No heavy lifting, please, just some fun stuff to make me think in a positive and curious way, and keep me distracted from whatever I happen to be looking to escape that day.

So I got to thinking, of all the sports novels, biographies and autobiographies I’ve read through the years, what constitutes my personal Top 10.

And here goes — maybe it will give you an idea for some beach reading, or spur you to think about your own list, and pick one back up that you haven’t thought about for awhile. 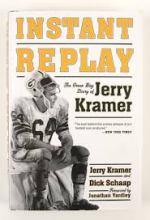 3. Instant Replay by Jerry Kramer. Another in my sports diary phase.  This one takes us from 1967 Green Bay Packers training camp through the regular season, postseason (Ice Bowl, anyone?) and Super Bowl II (Lombardi’s last game coaching the Packers). Narrated  through the eyes of offensive guard Jerry Kramer, if you are fascinated by the legend that is Vince Lombardi (as I am), this is as close to the man as it gets. Kramer is insightful and funny, and offers up my needed doses of historical context along the way (for example, 1967 is the year that Paul Hornung had to sit out due to his gambling suspension, and Kramer’s inside look into how Lombardi dealt with that loss, as well as the coach’s loyalty issues involving Jim Taylor’s defection to New Orleans, is priceless).  Favorite subtle tidbit: Kramer’s commentary on how worried he was heading into a game with the Cowboys, where he’d be up against Jethro Pugh. Should he let the distinctly-named Pugh by for a sack on teammate (and Lombardi teacher’s pet) Bart Starr more than once, it will seem to his friends and neighbors in the stands that they’d been hearing the name “Pugh” on the loudspeaker all day long at Jerry’s expense.

4. The Long Season by Jim Brosnan. Another baseball diary, this was Ball Four before Ball Four. Brosnan was a nondescript middle reliever, primarily pitching for the Cubs and Cardinals in the mid- to late-’50’s and early-’60’s (the book chronicles the 1959 season). For me, this book helped fill a historical gap in my personal baseball memory bank, as I didn’t know much about the names and characters during that era (say 1956 to 1965 or thereabouts).  Looking back, I now enjoy realizing that Brosnan’s close friend on the Cardinals pitching staff, Ernie Broglia, is today the answer to the trivia question, who did the Cubs get in return when they traded Lou Brock?  I also now realize that during one sequence, when Brosnan is getting rocked by the Phillies and hopelessly waiting to be removed from the ballgame, he offers a meatball to an unknown Phillies infielder, George Anderson.  “Hit it, George,” Brosnan thinks to himself as he offers up the down-the-middle fastball. That George Anderson would go on to some fame years later, when he became World Series Champion manager Sparky Anderson, is part of the fun for baseball wonks like me. Favorite subtle tidbit:  Bored one afternoon, Brosnan describes how he cajoled Cards hitting coach and Hall of Famer, Paul Waner, to work with him in the batting cage, letting us in on the bullpen secret that every pitcher in the league believes his bat is the unrecognized solution to their team’s offensive shortcomings.

5. The Book of Basketball by Bill Simmons. I find Bill Simmons one of the funniest and relatable sports writers of our time, and his passion happens to be hoops.  Every page or two provides a laugh out loud moment, and his footnotes often contain the most side-splitting morsels, so don’t ignore them.  Rarely can I stay engaged for over 700 pages of anything (King’s Needful Things comes to mind, but not many others), but I can read this one over and over and discover new items of delightful attention every time. Plus you get an (understandably biased) historical perspective on the league including Simmons’s list of all-time greatest players, that can allow me to excuse his natural bias as a fan of my despised Celtics, because it is just so darn entertaining. Favorite subtle tidbit: It’s a footnote moment, when Simmons points out that he’s always wondered why more wasn’t made of the fact that Magic Johnson had one of the all-time great pornstar names.

6. When Pride Still Mattered by David Maraniss. Like I previously stated, I’m a huge Lombardi fan. Not too many laughs here, but an in depth look at the life and times of the man who may be the greatest coach of all-time (he gets my vote). Favorite subtle tidbit: When Maraniss describes Lombardi’s process for taking over a new organization, first rearranging his office furniture, thus sending the message to all involved that change is coming. 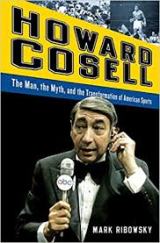 7. Second Wind by Bill Russell. Russell’s first memoir (I imagine he may have written others since then, but this is the only one I’ve read). Great basketball read, especially for an inside look at the Celtics Dynasty of the late-’50’s and ’60’s. Cool description of his relationship with Red Auerbach, and honest depiction of how he dealt with the racism prevalent at that time, both in the city of Boston, as well as the country at large. Favorite subtle tidbit: Russell recounts a locker room scene where he finds his father with tears in his eyes after witnessing his son in the postgame shower, soap lather being rinsed off his black skin onto the skin of the white teammate by his side. The symbolism and progress that moment represented to the older man still gives me goose bumps when I think how Russell conveyed that to his reader.

8. Howard Cosell by Mark Ribowsky. My favorite announcer, by far, growing up.  He made Monday Night Football appointment viewing, gave that special feel to a heavyweight championship fight and was a trailblazer in both radio and television journalism throughout his career (which I didn’t realize until I read this book hadn’t begun until he gave up his law practice at the age of 40). Of particular fascination to me was the complex relationship between Cosell and Muhammad Ali, and how that evolved through the years. Favorite subtle tidbit: this wasn’t in the book, but I just watched Battle of the Sexes the other night, about the Billy Jean King versus Bobby Riggs tennis match in the ’70’s. I had no idea that Cosell was the commentator on that one, too (alongside Rosie Casals, one of the true badasses of the 1970’s women’s tour)! And anyone who ever saw his cameo on the old television series The Odd Couple, when Oscar and Felix join Howard in the booth for a football broadcast, should YouTube that one again — so funny!

9. Foul! by David Wolf. The story of schoolyard hoops legend Connie Hawkins, and how the point-shaving scandal of the ’60’s derailed his career. Wolf does an amazing job of depicting the lonely, impoverished upbringing Hawkins worked through and how basketball became his lifeline to a better future, only to have it stripped away by the point shaving scandal while a freshman at the University of Iowa. The historical perspective not only takes you through life in the Bed-Stuy section of New York City in the 1950’s, but Hawkins’ vagabond journey through the Harlem Globetrotters, the failed ABL, the ABA, and ultimately NBA stardom, after suing the league for entry. Favorite subtle tidbit:  As a kid, I only knew one nickname for Wilt Chamberlain — Wilt the Stilt. After reading Foul!, I came to know him by his true, league nickname — The Big Dipper, or just Dipper.

10. Branch Rickey’s Little Blue Book. A compilation of notes, anecdotes and thoughts from the architect of three of baseball’s most iconic organizations, the Cardinals of the 1930’s and early-40’s, the Brooklyn Dodgers of the ’40’s and ’50’s and then the Pirates of the ’60’s.  This one is only for us nerds, as it gets deep in the weeds of fundamental baseball and what makes a great player and a winning club. Favorite subtle tidbit: Rickey’s initial scouting report on a young outfielder named Bob Clemente — the kid will never hit.

Obviously this is an extremely subjective list, but fun to think about nonetheless.  The hardest part for me was whittling it down to only 10. Some others that nearly made it but I ultimately had to relegate to Honorable Mention status included:

The Winner Within by Pat Riley — an excellent book on leadership, with great hoops content.

Life on the Run by Bill Bradley — anything about the Knicks’ last title worth a read.

Rockin’ Steady: A Guide to Basketball and Cool by Walt Frazier — a must for any impressionable kid who simply wishes he was cool.

A Great and Glorious Game by Bart Giamatti — important baseball thoughts from the games’s all-time great commissioner, who passed too soon.

Paper Lion by George Plimpton — for superfans everywhere who only wish they could get in the game just once.