You know what they say about good intentions.  As I set out planning my last post on MLB Brothers, my intention was to sprinkle in a few photos of one or two of the more obscure players I’d be bringing up over the course of that day’s discussion.  For example, the handsome devil above is none other than Henry Mathewson (aka Christy’s brother).  Projected as the batting practice pitcher on my All-Time MLB Brothers squad, a photo insert of young Henry circa  1906 would have added a little something extra to my post.  Not that my obscure references to hazy childhood memories aren’t already scintillating enough, that is.

Unfortunately, I am a tech dinosaur. I blame it solely on lack of training. In fact, my high school graduating class was the final one able to escape graduation, diploma in hand, without having to take a mandatory computer science class.  And it shows.  Case in point, I recently allowed my euphoria over the launch of the Sports Attic blog to motivate me to drive to the local Apple store and purchase a new laptop. All the better to allow for posting arcane tidbits while channel surfing through multiple, simultaneously-scheduled sporting events.  That was about two weeks ago, and with the exception of the flukey insert of the Cleon Jones “mustache” card (above) from the 1975 Topps series in my inaugural blog entry, I’ve been flummoxed in my attempts to add pictures and photos ever since. 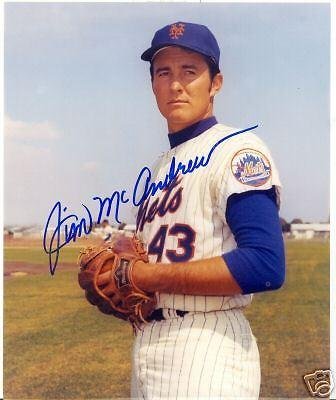 But look at me now (although I shaved at least year off my life expectancy with today’s second visit to the Apple store for instruction from an impatient 22-year-old technician)!  Above you see Gary Gentry, the actual starter of the first Mets game I ever attended (in 1971, not 1972 as I had erroneously believed for only 40 years or so), alongside Jim McAndrew (the guy I thought had been the starting pitcher that day). As previously noted, I never liked McAndrew for no particular reason, and the idea that he was the first starter I ever witnessed for the Mets at Shea was just…so…wrong.

I have to say that while neither had storied careers, the move to Gentry and away from McAndrew in my memory bank is actually a significant  uptick to my “first game story,” and I’m feeling overall pretty good about this late-in-life realization (thank you Baseballreference.com). Not only did Gentry figure in the backstory of the infamous Nolan Ryan trade, but also was part of the key trade that led to the Mets facing off against the A’s in the 1973 World Series, when he and Danny Frisella were traded to Atlanta for Felix Millan and George Stone before the 1973 season. It remains to this day one of the few trades the Mets executed on during my childhood that was lopsided in our favor.

Which, perhaps more importantly to yours truly, allowed the smooth-fielding second-baseman Millan to turn double-plays with my second favorite Met player of that era, Teddy Martinez (above). Martinez actually had 263 AB’s in that World Series year of 1973, and another 334 in ’74 before moving on to the Cardinals. So he was a relevant contributor to those Mets rosters, but never as relevant as on that July day in 1971 when he absolutely owned the Houston Astros and their young starting pitcher, Ken Forsch.

And of course none of these discoveries would matter at all if I didn’t somehow remember over all these years that it was the lesser Forsch brother, Ken, on the hill against us in that first game of mine back in ’71.  And I remembered him simply because he was a “brother,” thus earning him and younger brother Bob consideration for my All-Time MLB Brother team. That they didn’t make the cut over Christy and Henry Mathewson, among other HOF brother pairings, is really besides the point. 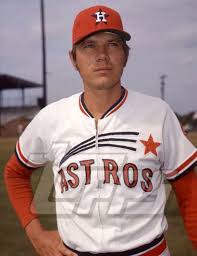 So there it is.  Look for more photos going forward, and if I get really ambitious I’ll figure out how to have each player’s name become a hyperlink (I think that’s the term?) that will take the reader upon clicking it to the player’s lifetime stats.  And then we’ll move onto video clips, music, movies — the possibilities are absolutely endless!  Maybe Morristown High School was onto something when they started making their students take computer classes back in the ’80’s.